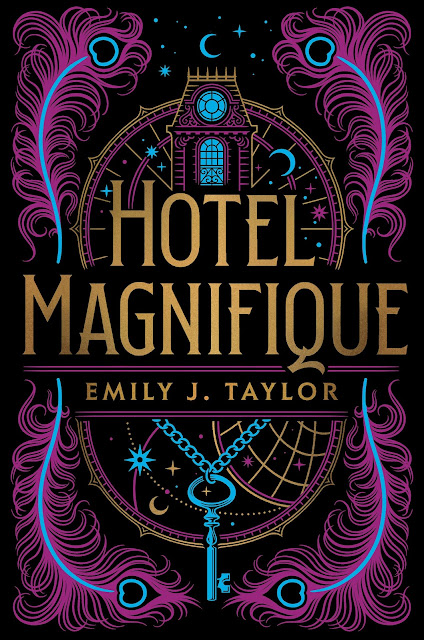 BLURB from Goodreads
A deliciously decadent, enchanting YA fantasy about the disturbing secrets lurking in the legendary Hotel Magnifique – perfect for fans of Caraval and The Night Circus.

The legendary Hotel Magnifique is like no other: a magical world of golden ceilings, enchanting soirées and fountains flowing with champagne. It changes location every night, stopping in each place only once a decade. When the Magnifique comes to her hometown, seventeen-year-old Jani hatches a plan to secure jobs there for herself and her younger sister, longing to escape their dreary life.

Luck is on their side, and with a stroke of luminous ink on paper the sisters are swept into a life of adventure and opulence. But Jani soon begins to notice sinister spots in the hotel’s decadent façade. Who is the shadowy maître who runs the hotel? And can the girls discover the true price paid by those who reside there – before it’s too late?

REVIEW
I fell in love with this book cover as soon as I saw it! The gold font of the title, the peacock feathers, the key on the chain, the moon by the little hotel also depicted on the cover, it all
Sets the atmosphere for the book, majestic, mysterious and most likely marvellous!
These items and the colours on the colours used on the cover all suggest opulence and luxury, which certainly apply to the Hotel Magnifique. All the items on the cover are relevant within the book and story too. I think this cover is one of those you don’t necessarily notice everything on it at once, but every time you look it feels like it reveals more. The cover certainly does its job very well as it made me take notice of the book, and its going to look amazing on a bookstore shelf!

The two central characters in the book are teenage sisters Janine & Zosa Lafayette who live in the Bezier residence in Durc. When their mother died, Janine had decided to travel to Durc with the last of their money in the hope that her younger sister Zosa would become a singer, and she could get a job, unfortunately things didn’t go to plan. The only thing the girls have is an old necklace belonging their mother which Jani wears all the time. Jani has been working in a factory to pay for them to stay at Beziers. When Janine sees an advert for staff vacancies at the Hotel Magnifique she comes up with a new plan. Zosa can audition to become a singer in the hotel and she will apply for whatever other job is available be it cleaning or cooking she doesn’t care as long as they are together.

Durc is buzzing with the news that the Hotel Magnifique will be visiting. Those with money rush to buy tickets, those without money hang about outside hoping to be chosen as one of the lucky ones given a free ticket into the Hotel. The Hotel has an almost magnetic type of pull for people, everyone seems to find it irresistible, even if they don’t get to go inside, people hang around just for a look at it. Hotel Magnifique is literally a house of dreams and magic. With rampant rumours about what goes on inside and things like the pillows being the softest ever made as they are stuffed with spun clouds. Guests sip on liquid gold in champagnes flutes for breakfast. The fancy doormen are all Princes and each night the hotel crosses the world over 3 times! When the hotel appears in Durc it is squished between two existing buildings and it looks rather run down on the outside.

Zosa sings and is immediately given a contract to sign and told to report back to the hotel before midnight. At midnight every night the Hotel Magnifique disappears from its current location and appears at the next place it will visit. Usually, hotel guests stay for around 2 weeks though some stay much longer. When Bel a man from Hotel Magnifique arrives at the Bezier residence to collect Zosa, he meets strong resistance from the sisters, as Jani insists that she is given a job, any job, she will do anything as long as she can stay with her sister and they have never been apart from each other since Zosa was born. Without giving too many secrets away, Jani is hastily given a contract to sign, as everyone needs to sign contract to enter the hotel, even the guests sign one!

It soon becomes apparent to Jani that all is not magical, opulent and amazing inside the hotel. It may well seem like that for guests, but the staff see a very different side to the hotel and its Maitre and head Suminaire, Alastair. Jani starts work with some other new young girls and women under the supervision of Beatrice as a maid. Zosa is staying in a different part of the hotel and the two girls do not see each other as they wish too. When Jani asks one too many questions and ends up being somewhere she shouldn’t be she is cruelly demoted by Alastair and sent to work in the kitchens. Sadly, Jani sees the true awful side to Alastair and learns not everything is as it seems at the Hotel Magnifique. Unfortunately for Alastair, Jani is not prepared to stay quiet, or give up on seeing her sister.

That’s really all I want to reveal abut the plot of the book. The plot goes off in quite a few directions, the stories of the different members of staff and how they came to be working in the Hotel Magnifique. Then there’s the intricacies of how the hotel works the way it does and why. You also learn about how Hotel Magnifique came to be and its revealed how Alastair became known as the most powerful Suminaire, as well as the histories of the other Suminaire/magic wielders.

I found I liked quite a lot of the characters in the book, though my favourite character has to be Bel, the dark brooding young man always in the background, watching and ready to rescue Jani is she needs it. A wielder of magic himself, perhaps the strongest one in the hotel has a special job every night at midnight. Bel has seen both sides of Hotel Magnifique and soon finds himself becomes attached to the persistent sister of the new singer Zosa. He knew the hotel was a dark place and tried to dissuade Jani from coming with Zosa but Jani refused to listen. I also have to mention Beatrice, and her backstory. She really did become a friend to Jani despite the risks to herself. I loved the “ending” that the author gave Beatrice, it was perfect. Another character that doesn’t really feature in the book much is the Minette Bezier who rents the girls a room in her establishment. Minette was once a lucky receiver of a ticket for a stay in the Hotel Magnifique and has told the girls how magical the place is and how handsome the Maitre is and how he didn’t seem to have aged since the first time she ever saw him when she was a young girl to the time she actually stayed in the hotel. Minette is a sort of mother figure to those that stay in her home somewhat under her care. I thoroughly enjoyed being initially skeptical about the grand Maitre of Hotel Magnifique, Alastair, then as time went on and the hotel history was revealed and secrets unfurled, he made a perfect bad guy. The author does present the reasons for Alastair being so obsessed, single minded and set that no one will get in his way of his vision of becoming the ultimate Suminaire and master of all he surveys.

I felt an initial pull to the book primarily the cover, then read the blurb and knew I had to read the book. I adored Jani and Zosa, always sticking together, looking out for each other. Jani is the more practical older sister, the responsible one who has been working in a factory so Zosa didn’t have to. Zosa kind of has her head in the clouds. As the younger sister she seems more carefree. Instantly carried away by being able to sing in the hotel and signing the contract before Jani can even ask if there is a job for herself. Though the two sisters end up separated inside the hotel Jani is determined to look out for her sister and does the best she can.

I felt really immersed in the book, I hated having to put it down to sleep! Unusually I even sat and read some of it in the day time, which I can’t normally do. I’m more of a curl up and read in bed reader. There were lots of clues as to what may happen and I enjoyed guessing the “talents” of the different characters. I loved wondering what was going to happen next to Jani as well as what was going to happen next within the hotel too. Hotel Magnifique has happiness, and “pretty” magic but it also has a darker, twisted, sinister rather awful and shocking side too, and I loved it all! From the authors descriptions I could visualise the people, places, and surroundings. I think this book would make a brilliant movie or Tv adaptation, so long as they stick as close as possible to the actual book.

My immediate thoughts upon finishing the book were Wow, the book lives up to one of the words in the title, it really is Magnifique!! I felt totally entranced from the first word to the last, amazing.

Summing up, you really need to read this one. I haven’t read either of the books it has been compared with, Caraval or The Night Circus though I do have both books on my kindle/book-shelf. The book I have read that it made me think of was Daughter Of The Burning City by Amanda Foody, which I also highly recommend reading. I will definitely be keeping an eye out for what is coming next from this author.